Posted on September 27, 2013 by expresschemist

Over the last two weeks I’ve looked retrospectively at baby products. In this, the last of our tetralogy of baby care reviews, I’m focusing on baby products we’re still using today. We keep a box full of ‘baby bits’ for Buddy (Express Chemist test baby) which holds all the necessary oddments for keeping Buddy chipper. “What’s in the box?” I hear you ask, well let’s take a look.

Sudocrem,  our number one favourite nappy rash cream by a country mile. It can be a little bit pricey but it does an excellent job. Many’s the time when I’ve gone to change Buddy, found a mystery rash and put a bit of this on. It’s thick, pasty consistency allows you to be quite sparing and I always notice an improvement come the next nappy change, quite often one application is enough to banish the rash altogether. I can also use Sudocrem on Buddy’s brother’s eczema and on occasion, it will get used on the grown ups too, top marks!

I recall all to well the first time I noticed nappy rash on Buddy and thought at the time that I’d been a bad dad for not having been more rigorous on the nappy change front. I’ve learned however that nappy rash (with Buddy at least) can be a fairly random occurrence. Sometimes Buddy will have a rash after an apparently indolent time in a fresh nappy. Conversely, I’ve noticed also that after a good few hours running about on a hot day, Buddy won’t have a rash when I’ve fully expected to find one. Given this I advise parents not to worry too much about nappy rash, it’s almost certainly going to rear it’s ugly head despite your best efforts, just make sure you’ve got some Sudocrem (or similar) around and get it on your baby as soon as it appears.

I’d urge parents with newborns to not be too shocked when Cradle Cap appears either. When I first encountered this on Buddy’s little noggin it’s unsightly appearance led me to immediately question whether or not I was washing him enough. The fact is Cradle Cap bothers us parents a lot more than the afflicted baby. In our box of baby bits (although it often finds it’s way to the kitchen) we keep some olive oil which we rub into Buddy’s scalp at this first signs of cradle cap. At Express we sell Bells Olive Oil, although any olive oil will do and you can of course also use it to cook with. I would worry that Buddy’s head would burn if oil was put on just before we go out which is why you’ll also find a few sun hats in our box, Buddy’s favourite seems to be one with a print of multicoloured hippos on it. Alternatively we found you can also use good old Vaseline, which works equally well, although for Buddy the tendency was for him to ‘manually investigate’ his head resulting in greasy little hand prints about the place.

With the heat wave we’ve had in the UK this Summer a recently new addition to our box is Bepanthen sun cream. A selling point which makes this product particularly attractive is that no parabens are used. Parabens are chemical preservatives which are claimed by some to have carcinogenic properties, although the mainstream cosmetics industry maintain they are safe. I’ve read also that methylparaben (a compound from the paraben class) may react with UVB rays, leading to DNA damage. I figure based on the conjecture to leave parabens alone, especially when it comes to products for my kids. As you may have gathered from my baby care posts I’m all for baby products that can also be used on the rest of the family. The Bepanthen sun cream is factor 50+ and given that we’re all a little pallid in our house, this gets used by all of us.

I feel I should stop here to state that having a baby, a bit like getting married, often means you get charged a premium for the associated paraphernalia (take a look at the price of nappies or formula milk) with a bit of thriftiness it needn’t be this way. If you seek out non-baby specific or generic alternatives you can save yourself a few quid.

The nappies and wipes you’ll find in our box will always be the cheapest we can get at the time. I tried a lot of different nappy brands and have to say that I don’t find any particular brand stands out above the rest. My findings are that nasty leaks will occur even if you used the A1 ‘top buy’ nappy, that’s just how it is. Sorry folks, but I can’t offer any brand allegiance here, buy bulk and buy cheap, there really is no need to be precious about something that’s destined for the bin anyway.

The last few things you’ll find in our box are all concerned directly with Buddy’s health. Not having a decent collection of antibodies at the outset, Buddy, as I’m sure is only natural, has picked up a number of nasty looking (and sounding) infections in his first year. We’ve always had Calpol on hand to combat the common symptoms he’s had. High temperature and lethargy are fair indicators that your baby is coming down with something and Calpol will help them stabilise, although you’ll still need to see the doctor for diagnosis.

Despite the seemingly pleasant flavour Buddy would protest upon being administered Calpol. A trick I found to get the stuff in him is to get him comfy on his back with a bottle and then swiftly switch out the bottle for a Calpol loaded spoon, being sure to get the bottle back in place quickly so he’d wash the Calpol down with milk.

Buddy has also had coughs, for which we have Vicks plug in Vapourisers, although, as I understand it, these are now harder to come by. We also have Snuffle Baby Vapour rub. We rub a little of this on his chest and neck and also on his blanket to help him to breathe better at night when he has a rattle in his chest. We prefer these over cough mixtures and syrups which, on inspection, are heavily laden with sugar and like Calpol, are hard to get Buddy to take.

Buddy’s nearly got a full set of milk teeth now, with some of his molars still working their way through. He gets particularly whiny at points with his teething and tends to stuff his hands in his mouth to chew on them. We have teething rings which he’ll munch on for five minutes and revert back to his fingers. Bonjela teething gel, with a ‘baby-safe’ concentration of anaesthetic lidocaine, does on occasion put a stop to this and so has also gained the honour of a place in our baby box.

I realise looking though what I’ve written that I’m most probably relisting a bunch of baby products that most parents will already have their hands on. For expectant parents doing their research I hope at least that by confirming what I’ve found to be useful, and have kept using, that I’m helping you make informed choices. For any parents reading, I hope that shoehorning in the tricks and acquired wisdom I’ve learned will be of use to you. For anyone else reading, I hope to have projected a human face for our company.

Here’s a photo of Buddy and me taken this morning, even if I do say so myself I think you’ll agree he’s very cute, aww. 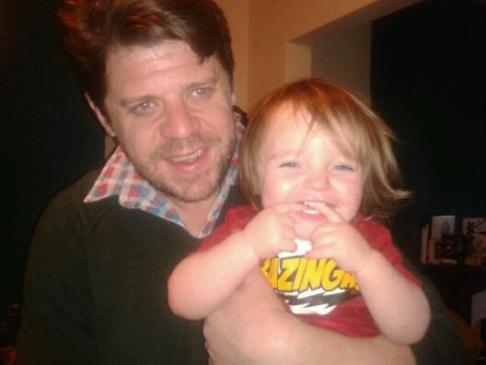 I’m leaving the baby reviews here for now but If anything new comes along that I think is worth shouting about I’ll be back to waffle on about it I’m sure. As ever please do comment back with any concerns.